Shared mobility has the future. The cost reduction of both hardware and software and the permanent stalling of “traditional” transport modes have made it commercially attractive to offer new flexible means of transport, especially for short-distance urban journeys. Private ownership is no longer required. Whereas car-sharing is modestly on the rise globally, it is especially the sharing of electric scooters that catches the eye. These have gone viral in major world cities.

In collaboration with Brussel’s ‘Vrije Universiteit’, Loendersloot conducted a study into policy development and regulation with regard to this “free float” mobility. Because some providers of free float bicycles placed bicycles in public spaces without approval in the past, the new “freefloat” is under a magnifying glass. Our researchers found three completely different policy approaches in Amsterdam, Brussels and Madrid.

The City of Amsterdam, The Netherlands, is historically crowded with bicycles and has been facing huge challenges regarding bike parking for decades. It is not keen to have ‘free float’ rolled out on its busy streets in the city centre. To prevent “free float” of electronic scooters on its streets, Amsterdam city council re-enforced an old local law forbidding on-street trading, originally crafted to prevent shoe-cleaners taking the streets. It still only allows a moped-sharing system in its suburbs.

In Brussels, Belgium, all initiatives to get Brussels residents out of the car are embraced wholeheartedly. A new legislation on shared mobility is now valid in all Brussels suburbs. An important feature of the legislation is that it does not exclude anything from the outset and that maximum room is provided for later interpretation. A complicating factor is that permits for “free float”-operators are issued per municipality. With 19 municipalities within Greater Brussels, it remains an utopia for the free float-user to traverse the entire city per e-scooter.

Whereas in Brussels concessions are only given to a few providers per municipality, in Madrid, Spain, the Spaniards are happy to give as many companies as possible the opportunity to start new services. Although an unlimited number of licenses per area are available, there is a cap on the number of e-scooter applies per zone. This results in a limited number of E-steps per company per area,often too low for successful business operations. The Madrid companies also have the obligation to place all their e-scooters back in their own zones at least once a day. This results in an enormous relocation task; it is up to an army of freelancers to locate abandoned e-scooters. 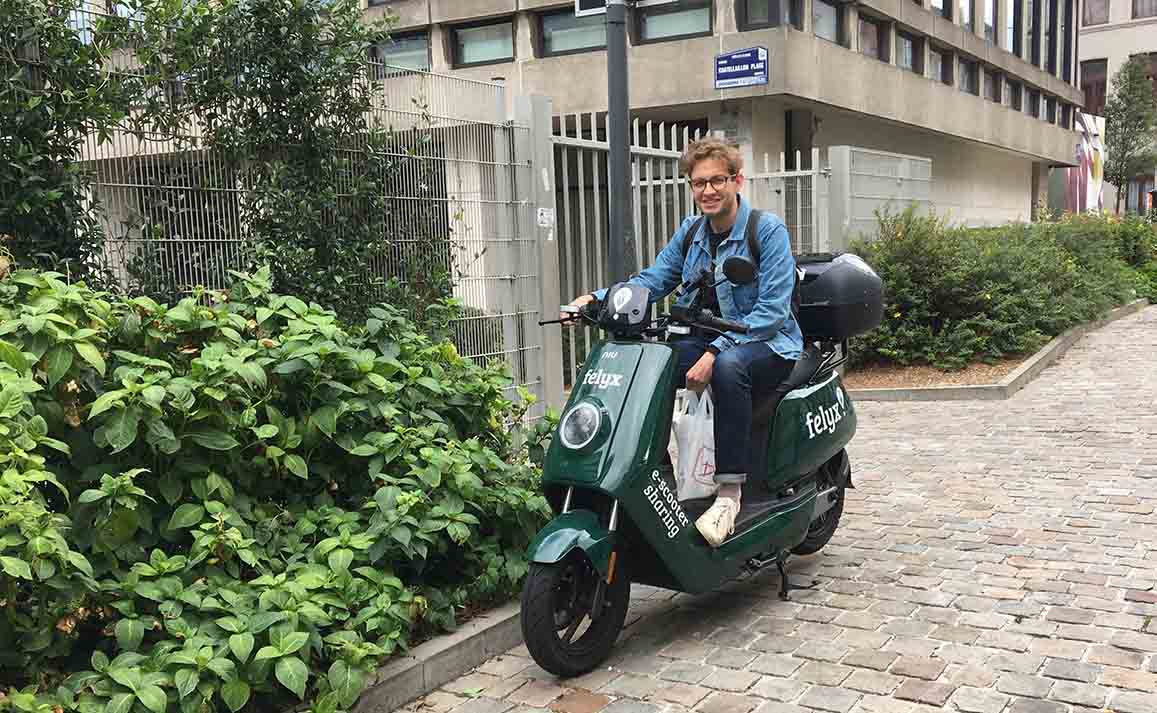 Research into policy development and regulation of “free float” in three European capitals shows three very different approaches. The varied approach is driven by major differences with regard to local factors, prevailing administrative cultures and willingness to take action. Nevertheless, there is a collective learning process in all cities, where the government, stakeholders, consumers and citizens are all looking for ways to give free float mobility a place in existing structures.

Rens enjoys problem solving, is analytically strong and is aware of human dynamics. He has extensive knowledge of urban development through his Masters in Urban Studies in Brussels. He prefers to apply his knowledge in a multidisciplinary team. Rens has also studied regulation around free-float mobility. He acknowledges the importance of a fine balance between assurance of innovation and public interests. His work experience regarding influencing human behavior offers added value when creating new policies.

Rens enjoys problem solving, is analytically strong and is aware of human dynamics. He has extensive knowledge of urban development through his Masters in Urban Studies in Brussels. He prefers to apply his knowledge in a multidisciplinary team. Rens has also studied regulation around free-float mobility. He acknowledges the importance of a fine balance between assurance of innovation and public interests. His work experience regarding influencing human behavior offers added value when creating new policies.